There are a whole host of potential safety issues that come with working with scaffolding – and no one knows this better than Safia Whitwham.

Safia is an Assistant Site Manager for Osborne on the Gade Valley project near Watford that is strengthening a huge viaduct and applying a new coat of paint.

The viaduct spans railway, roads and a river and a large amount of scaffolding has been erected to accommodate the works.

“We have £2.5m worth of scaffolding on site and part of my role was managing this and reviewing risk assessments and ensuring day-to-day safety is adhered to.” said Safia.
“One thing I found after we started was that people were working overhead but sometimes this wasn’t noticed by people on the ground” said Safia. She found that often people were moving safety barriers to get through as they weren’t sure what they were there for. “To make this element of the works safer, we introduced a marshall”.

When the strengthening plates arrived for unloading, Safia and her team put up signs and held briefings to make sure everyone on site knew the risks and how to avoid problems. This meant that heavy steel plates were hoisted onto the scaffolding and into place without incident.

Safia has seen a lot in her almost five years in civil engineering. But it is the practical experience on site that helps her be a good assistant site manager and safety ambassador. One memory in particular sticks out for her and taught her a valuable lesson. “I was working on a site on Aldershot High Street a few years ago and we had set up an exclusion zone with a diversion route. The diversion was quite long and on a Saturday night, people who had been drinking too much hopped over the fence to try and get through, this was of course incredibly dangerous, despite the fact no work was going on at the time.” She said.

The lesson taught her to “be prepared and think outside the box” when it comes to potential safety issues.

Safia is in a senior role at Watford and she’s progressed at a fantastic pace. Her Engineering talent makes her a positive role model for young women in an industry that despite year-on-year improvements is still dominated by men. According to campaign group WISE, women accounted for just 11 percent of those in engineering roles in the UK in 2017.

“Originally, I wanted to do something related to sports science, but after a while I realised it wasn’t for me. That’s when I got into engineering and maths, which has led me to where I am now.” Said Safia. Her mum played a huge role in influencing her decision to enter a male-dominated industry. “Mum was a great help. She supported me the whole way”, said Safia.

After studying at university in Southampton, sponsored by her now-employers Osborne, Safia got straight onto site and became more involved with the engineering industry. She was the 2017-18 chair of the Institute of Civil Engineering (ICE) London graduate Group and a former London Graduate of the Year.

Her role at ICE allowed her to make more people aware of what civil engineers do and encouraged others to get into the industry. “I was a diversity ambassador to encourage all genders and races to consider a career in civil engineering.” Said Safia. She also took part in ICE’s Pride celebrations, championing equal rights for the LGBT+ community.” 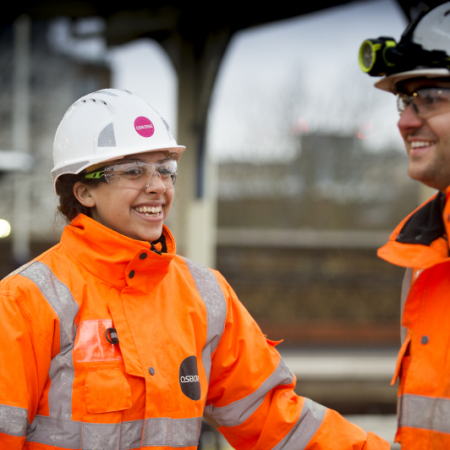