Osborne is currently working on a project on behalf of its customer, Network Rail. The project is not only technically demanding but is also located within two statutory nature conservation sites requiring extensive liaison with Natural England and the Environmental Agency so that the river flow and fish migration will not be impeded while piling is in progress.

This is a three span under-bridge carrying two tracks over the River Axe and it has been assessed that there is a medium to high risk of the foundations scouring out in the future.

The intervention agreed is to install concrete bags mattresses between the piers and reinstate the embankment with bag work revetments which will be completed with grout mattress type formwork and reinstated with sub-soil from the site.

The project involves the construction of steel pile caissons in two phases to divert the river course, allowing each of the three piers and their adjacent beds to be pumped out.

The site of works is located within two statutory nature conservation sites. The river has been so designated due to its diverse aquatic and marginal flora, the wide variety
of habitats for invertebrates and the presence of important species of fish including sea lamprey, brook lamprey and bullhead.

It is a valuable habitat for breeding birds and otters can also be found at the site. The project ensured that there would be adequate fish passage in both phases of the work with fish rescue being carried out by a competent and qualified contractor.

Water pollution management work will also be undertaken in a de-watered area so as not to pollute the river while working. When the cofferdam is released after the work, it will be released in stages so that the river is not silted up.

The project is due to be completed in October 2019. 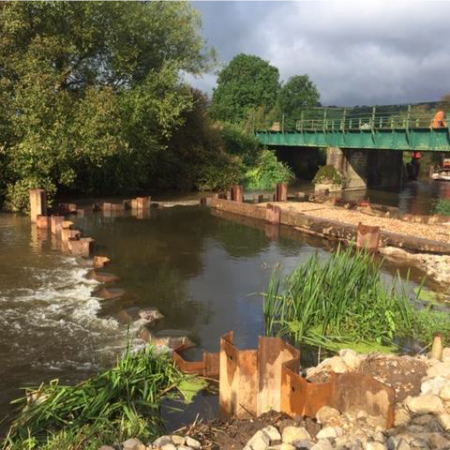