Native Land and representatives from the collaborative project team undertook the traditional topping out ceremony on the Regent House Project off the Edgware Road in London.

Osborne Chairman Andrew Osborne described the origin of the ancient ritual that marks a building’s construction reaching the highest point. Andrew noted the 226,000 man hours that have gone into the construction thus far along with 4,000 cubic metres of concrete and 340 tonnes of steel reinforcement and highlighted the invaluable contribution of everyone involved in the project.

Andrew Locke Director of Native Land, was then presented with a ceremonial Trowel to commemorate the event, and of course to place the final concrete. After the formal ceremony another Osborne tradition was honoured with the enjoyment of a commemorative cake carefully modelled on the Regent House building. 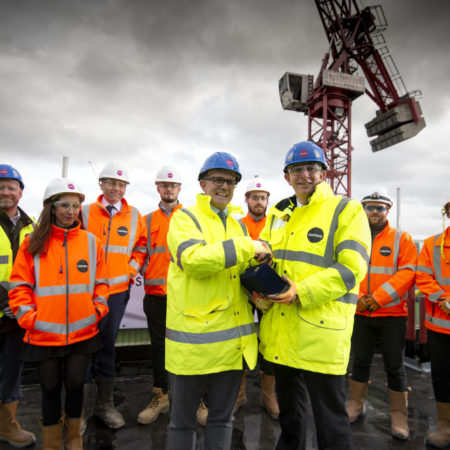 Read more
View all >
We use our own and third party cookies to give you the best experience on the services we offer. To accept cookies continue browsing as normal or click Accept. For more information please check our Cookies PolicyAccept