Osborne employees spent their Friday night amongst creepy crawlies as they slept outside in support of homeless charity, Trinity.

The brave and committed team of Osborne Property Services used their Community Day to raise funds and awareness for Trinity, who provide an array of incredible practical and emotional support for the vulnerable across Winchester.

The annual fundraising event ‘The Big Sleep Out’ which is normally held within the Cathedral grounds, was this year forced to be held in fundraisers back gardens, due to social distancing. This advantageous move, allowed our people to enlist the help of their families to create their structures for the night. From enthusiastic young artists, to exciteable wagging tails, our team created structures that saw some (but not all) of them safely through the night! The Big Build included a rounded igloo, a sturdy submarine, a cottage complete with flowers and a box fully lined to shield from the rain that fell furiously!

With the number of people who are homeless on the rise, not just in terms of people sleeping on the streets, but the ‘hidden homeless’, staying in hostels, sofa surfing or in unsuitable, temporary accommodation, we wanted to do our bit to help raise awareness. We are very proud of have exceeded our target raising a whopping £1000 for Trinity. Team players include: Vicky Fordham- Lewis, James Quy, James Dougall, Dean van Woerkom, Chelsea Hodgson, Neal Allison, Stephanie Rice, Steve Wakefield, Sam Hart

Chelsea Hodgson, Senior Estimator, Osborne and proud owner of the igloo commented; “It was great to be a part of this fundraiser. We had a great time building our igloo for the night and I am really pleased that collectively we have raised money for a great cause”.

Thank you to everyone that took part and for creating a constant flow of encouragement to see the team survive the night. 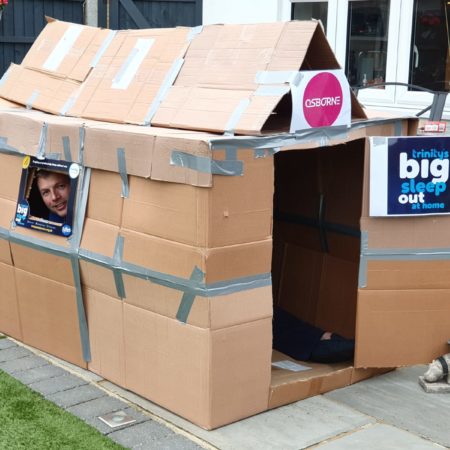 We welcome our new account manager to the Osborne Team