Chilgrove House is part of the Arun Community Engagement Project and has been launched with a range of new activities chosen by the public. Open to everyone, the space can be used to meet socially, exercise and gain help and support from the Arun Wellbeing team and local charities.

An official relaunch was held on 9 April.  As well as supplying a PA system, Osborne hosted an Easter and spring-themed art competition for local children which included prizes and medals for winners, including an Osborne colouring pencil set.  It was fabulous to see everyone enjoying the live music and a bouncy castle in the spring sunshine.

The Council’s Resident Engagement Officer reached out to Osborne ahead of the launch to ask for help in building some small planters, to help engage and educate the local children in how to grow their own fruit and vegetables. Osborne carpenter, Steve, built and delivered the planters to Chilgrove House ahead of the launch.

An event was then held for the children to plant vegetables, fruit, and herbs in the newly built planters. Plants were donated by Westons Garden and Property Services and Osborne were on hand to put up the hanging baskets and fit the bolt on the garden gate. We hope to return in the summer to paint the planters with the children.

Sasha Hawkins, Resident Engagement Officer, said: “These planters look amazing. Thank you to Osborne for the help with the community hubs over the last couple of weeks.”

Located at Kimberry, Wick, the community centre is open Monday – Friday for anyone to drop in. A school uniform swap will take place once a month along with the local community fridge attending each week. 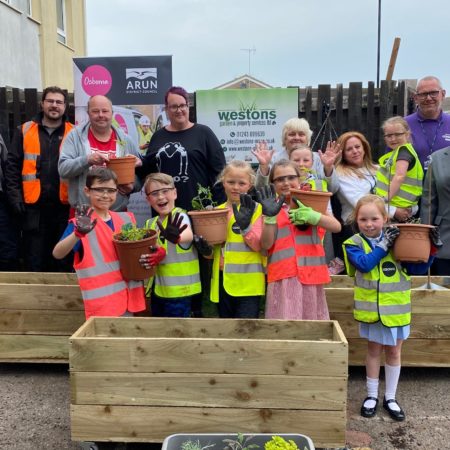