Imaginative Traffic Management Approaches That Also Save Time And Money

Repairs, upgrades and improvements to busy highways inevitably cause disruption. Often they also bring dissatisfaction and even anger as people experience delays and diversions. This is much more likely if the scale of the inconvenience is seen as avoidable.

Sometimes, of course, it’s just a perception – there really isn’t an alternative. But for others, a bit of lateral thinking and proper engagement with route users and local communities can save a lot of bad feeling. It might even be possible to get the disruption out of the way in a short concentrated burst of activity rather than have it drag on for weeks or months.

The really good news is that thinking more imaginatively about traffic management can also lead to significant time and cost savings – so everyone wins.

When a programme of safety upgrades was scheduled for the A120 between Braintree and Colchester the original plan called for a series of separate closures. The solution proposed by Osborne Infrastructure was to extend the closure to a twelve mile stretch of the highway and incorporate five schemes into a coordinated project.

Works were carried out simultaneously on five sites during overnight weekday closures, with clearly signposted diversions. Additional traffic management operatives escorted local residents through the works closure to their properties.

The unified project made the communication much simpler for road users and local residents – so the overall disruption was reduced. Combining the works also saved over 10% of the project budget.

Creative thinking produced even more significant gains on a substantial project to upgrade and re-waterproof the Claydon Interchange Bridges on the A14.

A lot of effort went into keeping road users, residents and local businesses informed about the works, which were completed during overnight weekday closures and a single weekend.

The redesigned project meant less disruption for road users and businesses and saved over 20% of the project budget.

Sometimes, it’s a question of giving traffic management issues enough attention. And by applying lateral thinking in that aspect of the project we often end up with plans that are quicker and cheaper to implement.

Access our free resource centre to find out more 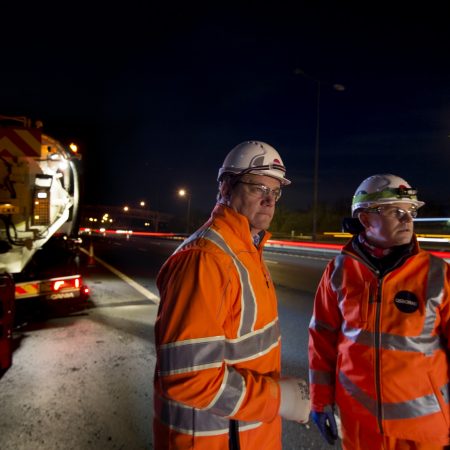